She's done!  Or at least close enough to declare it done and make the big payment.  She's booked on a freighter which is on it's way to pick here up.  Once back in the US we start the commissioning which will take 3 months, give or take.

Bottom paint is on, zincs are installed, and Propspeed is on the running gear.


Here's a good profile.  You can see the cables running from the cradle up through the bow thruster tunnel, and up through the hausepipes.  I'm assuming it's all part of securing the boat for it's ride across the Pacific.


One thing we added along the way was this stainless bash plate and tow eye.  The tow eye is a great attachment point for an anchor snubber, and the plate helps protect against strikes of logs and the like.  It's hard to see in the picture, but it extends about 8" below the water line.

We're back in Gloucester

I'm once again tardy with the updates.  We've been back in Gloucester for a couple of weeks, completing our winter Bahamas trip.  While the boat was in Charleston, we went home for a while and I spend a week in China doing the final checkout on the Nordhavn build.  More on that later.... On return, I went directly back to Charleston and met up with Laurie there, and the north trip continued.

This last segment took us first from Charleston to Annapolis with stops in Myrtle Beach SC,  Port Royal NC, Chesapeake VA, and Deltaville VA.  Once in Annapolis we stayed for a week, including a long weekend trip to CA to attend the Nordhavn owners rendezvous at their headquarters.  Our visit to Annapolis also included a personal tour of the Naval Academy by brother-in-law Joe who is a professor there.

After Annapolis we made an expedited run back to Gloucester, taking advantage of very favorable sea conditions and running fast several days.  You sure can cover a lot of ground running at 18kts.  The last segment included an anchor stop in the northern Chesapeake just a few miles before the C&D Canal, a stop at Cape Map, then a marathon run up the NJ coast in calm but foggy conditions (never saw NJ) all the way through NY Harbor to Port Jefferson LI for another night at anchor.  Then on to Westbrook CT for fuel and a marina night, followed by a run to Cuttyhunk.  Then from Cuttyhunk home.

Reflecting back, it was a great trip.  We had two goals; one to experience the ICW while we have a shallow draft boat, and the other to get a taste for the Bahamas.  We were pleasantly surprised by the ICW.  We knew it would be a combination of developed and undeveloped coast, but found it much less developed than we expected.  A few spots made for a tense moment or two as we watched the water depth drop then stop reading because it was too shallow, but we kept floating the whole time.  For us a big test of how much we like a trip is whether the return voyage is still fun, and it definitely was.  Would we want to do it again?  Yes, but not the same way.  There are inside parts that I would definitely do again, but in the future we look forward to longer outside passages directly between the places where we want to visit.

As for the Bahamas, what a great place.  It's so varied, and we only saw a small part of it, but you could spend months and months exploring any area of it.  We certainly look forward to returning once we are back cruising on the east coast again.

With the Grand Banks back in Gloucester, we have now officially moved off the boat and are nearly done returning her to factory condition.  The great thing about boats that get used regularly is that everything works, so we have no repairs to do.  Most of the work is cleaning to get the ICW scrubbed off the hull, but that's done and she's as shiny as ever.  All our stuff is moved off, and all the Grand Banks fitted bed covers, throw pillows, wine racks, wine glass racks, dishes, silverware, ice maker, etc are all back on board and ready for the next owner.  It's now in a what-you-see-is-what-you-get presentation form which makes things easier for prospective buyers.  Tanglewood II has been an awesome boat and carried us for nearly 8,000 nm of cruising.  I'm sure she will deliver the same to her next owner as we head out to the high seas.
Posted by Peter Hayden at 7:20 AM No comments: 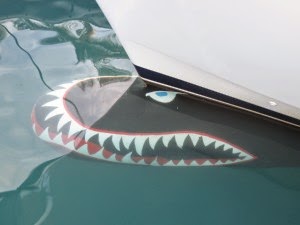 Posted by Peter Hayden at 6:57 PM No comments: