Some Modifications We Are Making

We are making a variety of changes to the "standard" N68, though that's kind of a meaningless statement since there really is no "standard".  The running joke is that if you've seen one Nordhavn, you've seen one Nordhavn.  They are all different, and that's one of the key features of the brand and company, at least for us.  This post will focus on some of the more noteworthy changes that we are making.  It will be interesting to see which, if any, find their way into the "standard" boat over time.

We can start in the pilot house where we are making some changes to the windows, building on some work done by previous buyers, and adding a few things that are important to us.

On the forward windows, we are doing three things.  The picture below shows the traditional forward view from the pilot house, and you can see the six forward facing windows, and at the far left you can see one of the side windows


The picture below highlights one aspect of the windows that we have found problematic.  You can see the side window on the left, and what might not be obvious is that the corner rounding from the front windows to the side windows is done with curved glass.  It looks kind of cool, but on our N60 we found the distortion associated with the curved glass to be quite objectionable.  One essential goal for us building a new boat was to eliminated that issue.

To address this, and to generally open up visibility, we are moving the window mullions out to the corner, and the mullions will form the curved corner rather than glass.  Then the glass will be flat on both sides, eliminating any distortion.  Then at the same time, we are switching to fewer, larger panes of glass.  Instead of 8 panes across the front and around the sides, we will have five as show in the sketch below.  Several boats before us took the step of merging the two center windows into one larger window, and we are continuing with that theme. 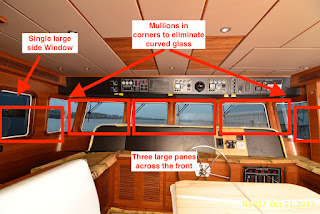 Here is the mold, with plugs blocking out the windows in their new locations.

Sticking with the pilot house and visibility, we similarly enlarged the windows all the way around, and sorted out a layout that provides nearly 360 degree visibility.  In the drawing below, the blue indicates where there is glass, and you can see there are only a few, relatively narrow lines of visibility that are blocked. 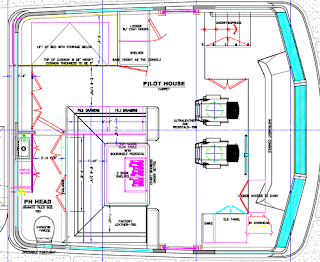 Moving down to the salon, our window theme continues to show through (pun intended).  One very annoying "feature" of the 60 is that when seated in the salon, you can't see the horizon through the windows.  The lower edge of the windows was too high.  So you find yourself in a beautiful location, and all you can see are the hillsides and sky.  I checked this carefully on other 68s and found that the windows are lower, which was good, but we were able to lower them even further to improve the view even more.  The picture below shows the typical windows, and the red line shows how we are lowering them such that the lower window frame will be flush with the counter/ledge, picking up about 2-3" more visibility. 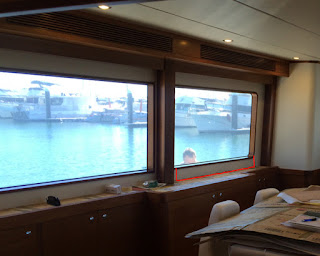 Moving down a level, the lower hallway leads to the engine room, and the picture below shows the engine room door.   The door is 18" wide, and when open, the locking wheel stands out narrowing the passage a bit more.  I found it to be a pretty tight squeeze so asked about widening it.  Jeff Leishman worked his magic and managed to widen the hallway and fit a 24" door, all with no ill effect on the adjacent staterooms.  In the next picture down I'm confirming the rough opening in the bulkhead.


Next is a feature that will either be a stroke of brilliance, and an utter failure, with very little room in between.  Our 68 is the aft pilot house version, and that means that the boat deck is in the bow.  That creates some complications when it comes to launching and retrieving a tender.  When you launch the tender, you end up on the forward deck and the tender ends up in the water 10 feet below you, with no way to get to it.  And similarly on retrieval, you bring the tender up to the davit line and get it connected, then somehow need to get back up on deck.

The standard solution is a removable ladder that hangs down the side of the hull providing a path between the tender and boat deck.  It works, but nobody seems happy with it.  The ladder is awkward the handle and difficult to hang over the side and get connected, and difficult to reverse the process.  Plus it's difficult to store.  A friend has never used his, and instead had mastered a way to scale the outside of the hull like Spiderman, using a sequence of the rub rail, a window ledge, and the high sides on his large tender.  I liked that idea, but with our window arrangement it wouldn't quite work, with "steps" of 30" or more which is too much.

Then I got this crazy idea about just building the ladder right into the boat.  The side boarding gate has a molded in toe pocket/step, and I thought why not do the same in the bow.  The result can be seen below with a set of four toe pockets/steps molded into the hull.  Everyone who's seen it thinks it will work, and the only trick will be where to locate one or more grab handles.

Email ThisBlogThis!Share to TwitterShare to FacebookShare to Pinterest
Labels: Building a Nordhavn 68