What's that you said?  A new boat?

Yes, despite postponing our trip south, our cruising appetite has grown considerably.  Not just our desire to cruise, but where we want to visit.  Over the past year or two we have been coming up with places we'd like to go, but 9 out of ten times they are unreachable in out current boat.  The Grand Banks is a really nice coastal cruising boat, but "coastal" is the key word there.  It has a range of 250 to about 600nm, which precludes getting to a lot of places.  It's also set up for daytime cruising, not 7x24 operation which is essential for any long passages.  The nav station, salon, and galley are one in the same.  Night operation requires heavily dimmed lights to preserve night vision, and given the way the boat is configured, that precludes any activity in the salon or galley.

In contrast, ocean-going boats carry significantly more fuel - 2400 gal vs 600 gal on the GB.  And they have a dedicated pilot house which is a separate room from which you operate the boat.  You can dim everything down in the pilot house for night vision, and not restrict activities in other parts of the boat.  Plus, they are build to take a lickin' and keep on tickin'.  Not that the Grand Banks isn't - it's an exceptionally well built, sturdy boat, but it has low sides, a low bow, and is meant to stay in port if it's going to be really nasty out.  In an ocean going boat, you are at sea longer than the weather forecast, so you need to be able to take whatever comes along.

Enter the Nordhavn, which is designed exactly for ocean going cruising.  The other thing that's really nice is that they are designed to be operated by a couple, with provisions for guest and crew as needed.  Almost all other boats over 50' are designed assuming they have a professional crew.  This means dedicate space for separate crew quarters, and a layout that allows them to move about the boat unseen by the owners and quests.  Nobody wants to see the house elves, or the seedy underbelly of the boat's workings, do they?  Egalitarian-me finds that quite distasteful.  Plus, I'm a geek.  I'm the first person in the engine room, every time.  The Nordhavns are set up assuming that 90% of the time they are operated by a couple.  And for the 10% where a hired crew is desired, there is room to accommodate everyone without compromise or imposition.

When I look back at our early exploration of boats, two stood out at the time.  Nordhavn and Grand Banks.  You might ask, "why didn't you get a Nordhavn to begin with?"  Good question.  The answer is "speed".  The Nordhavns are what's know as displacement hulls.  They push the water aside and flow along, but can only do so up to a certain speed.  If you have ever wiped out at high speed while water skiing, you know that water turns into concrete when you encounter it at high speed.  The same is true for boats as they move faster and faster through the water.  Pretty quickly the resistance of the water is like plowing through concrete.  It just doesn't work.  There are formulas that describe all this, and the bottom line is that a boats speed in "displacement mode" is a function of the square root of it's length at the water line.  The longer a boat is, the faster it can practically move through the water, but the length has to get longer a LOT faster than the speed goes up.  For a 50' boat, the top speed ends up being around 8kts.  That's not very fast.

In contrast, boats like the Grand Banks are built with planing hulls.  This means that as the boat goes faster and faster, it lifts up and starts to skim across the water, not just plow through it.  Once a boat is planing, it can go almost any speed as long as it can remain stable and not shake apart.  Our GB will do 22kts which is a LOT faster than 8kts.

Coastal cruising is typically hub-and-spoke cruising.  You keep the boat in some location (the hub), and each weekend (or longer vacation period) you hop on the boat and head out (the spoke) to make use of your finite time.  A fast boat makes a HUGE difference in how far you can venture from your hub, and can be the difference between new adventures and repeating the same old thing.  This is why we selected the Grand Banks over a Nordhavn.

However, our trip this past summer taught us about "linear" cruising versus hub-and-spoke cruising.  When you are on a linear voyage, it's all about the voyage, not about how far you can get in a day.   You are not trying to get somewhere and back in a limited time, you are on a quest.  And on longer cruises, you WANT to slow down, so speed capability is no longer a big deal.  On our nearly 3000 mile trip, I can count on one hand the number of days where we went fast.  Our conclusion?  Fast only matters if you are doing hub-and-spoke, and we are not doing hub-and-spoke.  And, we need ocean-going, long range to visit the places where we want to go.

What all this means is that we are in the process of contracting to build a Nordhavn N60.  As you can see from the picture below, it's as much a small ship as it is a boat, and the picture below that shows our current Grand Banks is comparison. 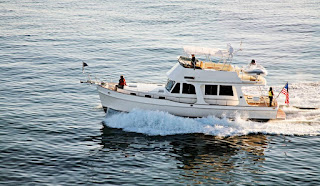 The N60 can travel well over 3000nm without refueling, can run 7x24, and has been proven over and over again as a go-anywhere boat.

Stay tuned for a number of posts about the whole process of detailing the boat, selecting options, trading off various things, and hopefully creating a boat that best fits our needs.