Before I start writing about this year's trip to Alaska, I really, really need to finish last year's trip.  When we last left off (if anyone can remember), we had visited Tracy Arm and moved on to Juneau where Laurie's brother and family (all except the New Zealand contingent) were going to meet us for a 10 day cruise.  While in Juneau, and before their arrival, I dealt with the Pesky Coolant Leak.

Paul, Deb, and Brent arrived safely and off we went.  Getting from Juneau over to Icy Strait involves a lot of zig zagging without much progress in the direction of Glacier Bay, but it's the only route.  Regardless, the weather was great, seas calm, and everyone enjoyed a relaxing ride.


We stopped for the night in a nice protected anchorage just off the confluence of the Lynn Canal and Icy Strait which was a good half-way point.  The next morning we were on our way and arrived in the afternoon at Bartlet Cove just inside Glacier Bay and the National Park.  Access to the park is highly regulated to protect the wildlife.  Only a certain number of private boats and only one large cruise ship are allowed in on any given day.  Access is via permits issued on a first-come-first-serve basis, and we had secured a 1 week permit.  On arrival you need to radio and ask permission to enter the park, which of course was granted by virtue of our permit.  The whole boat crew then needs to attend a little orientation session to hear about the park rules, what areas are off limits, etc.   It's a bit tedious, but key to maintaining the park's pristine condition, so we happily complied.


Once oriented, we headed out and swung by South Marble Island as our first destination.  South Marble is home to a large colony of sea lions and puffins.


Heading up the bay, the beauty is just stunning.


Our first night was spent at Blue Mouse Cove, and just across the bay from there we spotted a brown bear foraging for clams, crabs, or whatever along the shore.  It's incredible to see how effortlessly it over turned huge rocks to see what was underneath. 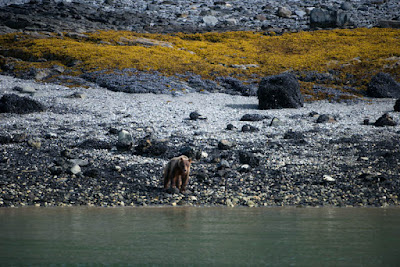 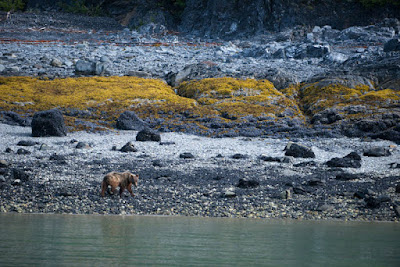 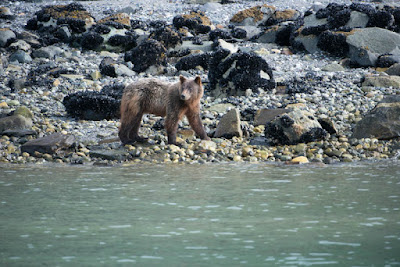 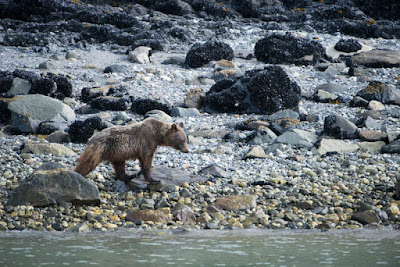 The next day we continued north towards the Johns Hopkins Glacier, stopping by the Lamplugh Glacier on the way.


The next sequence will give a sense of the scale of these glaciers.  Below is the Lamplugh Glacier as we approached.  Just off center to the right you can see some shoreline, and some small chunks of ice strewn along the beach.  That ice looks to be basket ball sized, or maybe beach ball sized, right?  Just wait.


Next, our intrepid crew decided that a landing party had to be formed, so Laurie and Brent launched the kayaks and paddled up to that little beach.  Well, that little beach turned out to be a LOT bigger than it appeared from a distance.

Here they are, kayaks hauled out, hiking up towards those basketball sized chunks of ice.


And that basketball-sized chunk of ice was actually a LOT bigger than a basket ball.  More like the size of a small van.  Here is the crew gathering a core sample.

Next stop was Johns Hopkins, or at least I think that's what this picture is.  The fore deck was a very popular place, as you can see.

The next night we spent anchored in front of Reid Glacier.  The cove where the glacier is located, coincidentally called Reid Inlet, is too deep to anchor in except for one area at the entrance of the inlet.  It's a great spot, but still almost a mile away from the glacier face.  Once again, the distances and sizes are very deceptive.  Paul and Deb paddled over in the kayaks, while Brent and I buzzed over in the dinghy.

Next we went up to the Grand Pacific Glacier and Margerie Glacier.  At this point we were less than a mile from the Canadian boarder.

Grand Pacific  is interesting because it's completely covered in debris and looks like land, not ice.

Margerie is the largest glacier face and is constantly calving.  One of the big cruise ships was in here when we arrived, but didn't stay long and then we had the place to ourselves.

After departing Glacier Bay we crossed Icy Strait to Point Adolphus which is famous for drawing whales, and we were not disappointed.   These humpbacks gave a great show.

After Pt Adolphus we pulled into Hoonah for the night.   Hoonah is an interesting place.  On one hand it's a commericial fishing town like most ports in Alaska.  But a mile or two down the road is a point owned by the cruise lines.  It's an old cannery that apparently has been turned into gift shops.  The cruise ships come and anchor, then shuttle hoards of people ashore to spend money in the stores, the profits from which go right back to the cruise lines.  It's a clever business model, but doesn't do much to help the local economy.

And now for the really odd part.  We wanted to go check out the stores, so Laurie and Brent paddled over in the kayaks and Paul and I took the dinghy.  As we approached, we were shooed away from the dock and told we could not tie up or land the boat anywhere along their property.  Their property was completely off-limits unless you came on one of the cruise ship tenders.  Laurie and Brent tried to beach the kayaks, and people came running over to chase them away too.  Apparently it's just fine if you want to take the shuttle bus from Hoonah and come through the gated road, but no other approach is allowed.  We decided that their inhospitality, plus the fact that the sales profits all get siphoned back to the cruise lines, was all the excuse we needed to go spend out tourist dollars back in town where they might actually benefit Alaska and Alaskans.


Finally on our way back to Juneau, we again approached Point Retreat, but this time from the other direction.  In the distance to the left you can see the Mendenhall Glacier which is just north of Juneau.

And just around Point Retreat we encountered a group of humpbacks who were bubble feeding.  They dive down and as a group blow a ring of bubbles around their prey.  The bubbles herd them together and as the bubbles surface, the whales all come up in the middle of the ring and gobble up the krill.

And last but not least, here is a really nice scenic to wrap things up.