I've been sitting on this issue for about a year hoping for a fix from Icom, but nothing seems forthcoming, so it's time to post anyway.  I prefer to post problems along with their solutions, but most of the time that's not possible.  At a bare minimum, I try to give the vendor ample time to respond.

The bottom line is that I can't recommend anything except the simplest version of the M506 with no N2K and no AIS since the N2K interface is fundamentally broken.

The M506 is one of Icom's newest marine VHF radios and is available in several different configuration.  They choices are:

I picked the model with NMEA 2000, but no AIS.  My primary navigation data was all on N2K at the time so that made sense.  The VHF could pick up GPS info from N2K enabling DSC emergency calling, and it could transmit incoming DSC alerts to my charting software to show the location of a distress call.  These are all important safety features.  Below is a picture of two of them side by side on my overhead dash.

As radios go, these are really, really good.  Incredible clarity, noise cancellation, the ability to play back recent reception, etc.  I've been very happy with Icom radios, and these are no exception, except for the N2K interface on the M506.  That's a disaster.

The first sign of trouble was that when getting underway, I would power on all sorts of things, and within a few seconds alarms would be going off on other devices indicating a loss of GPS signal.  The errors would clear on their own and not recur until the next time I got underway.  It took me quite a while to figure out that it was the VHFs that were causing it.

After many hours of traces and decoding messages, I finally saw what was happening.  The twist is that it takes two M506s on the same N2K bus to cause the problem.  Each one stimulates the bug in the other.

For those interested, here's what happens.  Otherwise skip over this numbered section:
To break the chain, you need to take one of the two M506s off the N2K bus.  Then each never sends an erroneous response to its counterpart's erroneous request.   This is how I have been running for about the past year, with one VHF on N2K and the other on 0183.  Once I broke this cycle, I never got another lost GPS alarm on anything.

Demonstrating the problem is very simple.  All you need are two M506s on the same N2K bus.  Power both on, then work through the menus to select which GPS you want the VHF to use.  On each you will see the other M506 as an eligible GPS source, when of course it isn't.

But wait, there is more.  Look back two pictures and you will see where you can select which AIS source you want the M506 is display on its own screen.  Well, that has the exact same problem.  Both my VHFs show the other as a valid and eligible AIS source even though neither of them has AIS.

So, great VHF, but don't waste your money on anything but the simplest, 0183 version of the product.

In closing, let me also add that I have updated both VHFs to the latest FW (V1.004).  That helped with some other problems, but does not fix any of what I have reported.  Icom also provided me with V1.005 to try, but no joy.  It didn't address the issues.  So don't waste your time and money sending your M506 back to Icom for updates - at least not at this time because they don't fix these problems.

And last summer (2016) I discovered that having two M506 VHFs on the same N2K network isn't the only way to stimulate the problem.  A single M506 plus a Furuno TZT2 chart plotter does it too.  Check out the photo below where the TZT2 seems to think that the M506 is a valid data source for all sorts of crazy data.  Drift, pitch and roll, rudder, rate of turn, atmospheric pressure?  Really? 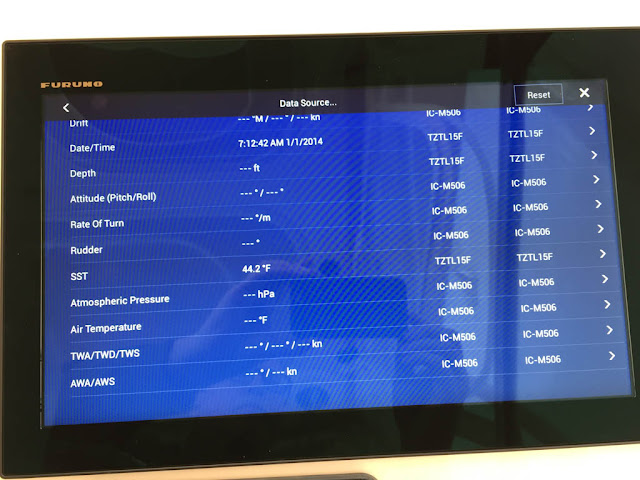 Email ThisBlogThis!Share to TwitterShare to FacebookShare to Pinterest
Labels: Electronics, Wall of Shame