Aside from a handful of boat projects that I'll cover later, we got in a little bit of winter cruising.  Then in April, we relocated the boat from Seattle to Ketchikan in preparation for another summer in Alaska.

The rumors are true.  It rains a lot in Seattle in the winter.  But there are nice days too.  The picture below is looking across the ship canal towards Ballard just as the sun broke through the clouds on an otherwise stormy day.  This has been our home port for the past two winters.


Sucia Island is one of our favorite spots, and in the winter we typically have it all to ourselves - except for one of the Coast Guard boats that stays here form time to time on a permanent mooring that they have.

In April we got underway to Ketchikan.  The plan was to have a leisurely cruise north, exploring more of BC than we did last year.  That turned out to be the best laid plans of mice and men.

First, we got a delayed start.  I had been seeing fluctuating gear oil pressure and thought it was a bad gauge, mostly because it had failed twice before.  But after replacing it for a third time it was still sometimes reading low and I felt we needed to get to the bottom of it before departing.  I'll write a techno-blog on it later, but the result was about a week delay in departure.

All went pretty well up through the Strait of Georgia to Campbell River, though on the last day we had 20-25kt winds and mildly heavy seas.  But the wind and waves were on our tail and the ride was actually pretty comfortable.  Not at all like pounding into it head-on.  But..... we had become a bit lax about how we were carrying one of our kayaks.  Rather than hauling it up to the boat deck and stowing it in it's rack, we had simply hauled it up on the swim platform and tied it down.  As the weather started picking up, we thought "oh crap", and I went back to make sure it was ok.  It was, so we powered on.

As we finally got into the calmer waters approaching Campbell River, we took another look and guess what?  Gone.  No more kayak.  Fortunately it didn't take any of the staples (the U-shaped railings that just sit in sockets).  Replacing one of those would have been much harder and more expensive than replacing the kayak.

I got on the radio to the coast guard to let them know we lost it and that nobody was in it.  When someone comes across an over turned boat, quite an effort ensues to figure out if it just drifted away from somewhere, of if it was manned and a search needs to be conducted.  I wanted to be sure someone finding our kayak didn't trigger a search and rescue.  The coast guard was very helpful and took our phone number in case someone found it, but we considered it a goner.

We got anchored up, and not more than an hour later I heard someone call the cost guard to report a swamped kayak.  The guy retrieved it, and took it to the fuel dock in Campbell River.  About 2 minutes later, my phone rang and it was the CG....  Very cool.  I love that there are still honest people in the world.  The next morning we back-tracked to Campbell River, stopped at the fuel dock, visited with the attendant who was a buddy of the guy who found the kayak, reloaded to kayak and properly stored it this time, left a big "thank you" gift for Nathan (the guy who recovered the Kayak), and still made it up to Seymour Narrows in time for slack water.  And that little delay led to the next bigger delay.

Seymour Narrows leads to Discovery Passage, which leads to Johnstone Strait.  Johnstone Strait is a notorious wind funnel which, coupled with an opposing tide, creates some nasty conditions.  We passed through Seymour Narrows at the tail end of the flood, so had a favorable current carrying us up Discovery Passage.  Then a change to ebb which would carry us out Johnstone.  If timed right, you can pick up 1-2 kts the whole way from Campbell River to Port McNeill and do the entire run in a day.  We had exactly such conditions but... we also had a gale warning for winds.

There are a couple of bail-out points along the run to Port McNeill, and we evaluate at each point whether to stop or proceed.  Normally a gale warning would trigger a bail-out.  Last year we had less than a gale and when the tide started to oppose it, things got ugly and we bailed out.  But this time the wind was on our tail, running with the current, not against it.  It turned out to be much like our run into Campbell River - windy and rough, but behind us and a relatively comfortable ride.  So we blasted along making an average of around 10-11 knots (we usually run at around 8).  Most of the boost was from the current, but we also ran the boat hard.  Doing that allowed us to stay with the favorable current the whole trip, where if we ran slower the current would have turned against us before we got to McNeill.

For the last hour or two of the run, the wind was really howling at 30-40 kts.  At one point I thought what a pain it would be if something went wrong under such conditions.  Little did I know how close to true that would be.

We made it into Port McNeill, and frankly struggled to get docked.  The float we were on, and the only one I would have attempted to get to anyway, was cross to the wind, of course.  I would have normally docked on the down-wind side to let the float act as a wave break (it was real rough in the harbor given the wind and its direction).  But I was pretty sure the wind was too strong to get to the dock sideways against the wind.  So we went to the up-wind side and used the thrusters to control how hard we came up alongside the dock.  Once on, we were pinned hard by the wind, and it took a while to get fenders arranged so they wouldn't keep popping out.  Then the penny dropped.

I did my post-run engine room inspection, and once again found coolant all over the back end of the engine all around the turbo, just like in Juneau last summer.  By all appearances the turbo studs had cracked again.  I'll spare you the expletives that ensued, but they were long and eloquent.  I just closed the ER door and we went ashore to get dinner.

I'll write a blog later about the repair, but it delayed us a full week.  The good news is that I'm now confident that we have the problem solved.  But the bottom line was that we had now lost 2 of our 4 weeks of cruising time, so really needed to just focus on getting to Ketchikan.

Once back underway, we still had a very enjoyable run.  Here's the view from Furry Cove with a full moon on the horizon .


Throughout  BC and Alaska, water falls abound.  Some are long and narrow, some are low and wide, and some are mixtures of both. 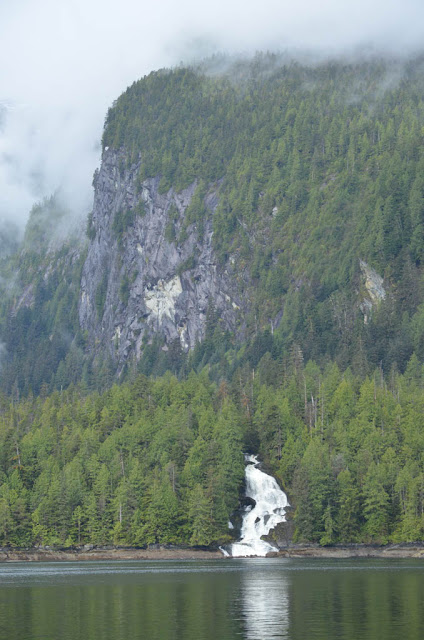 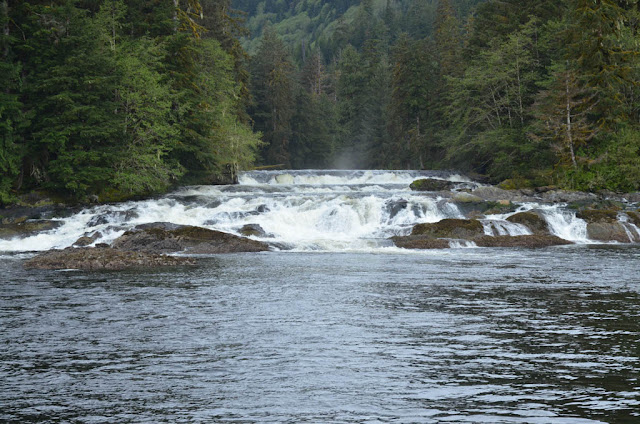 Here's Captain Electric at the helm enjoying the scenery.


This was one of the more interesting falls, looking very different from various angles and distances. 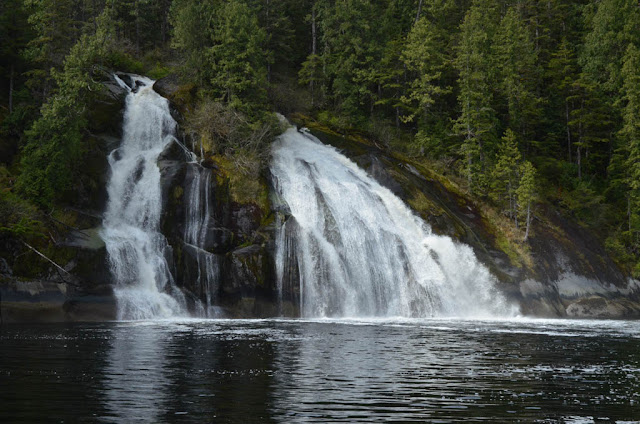 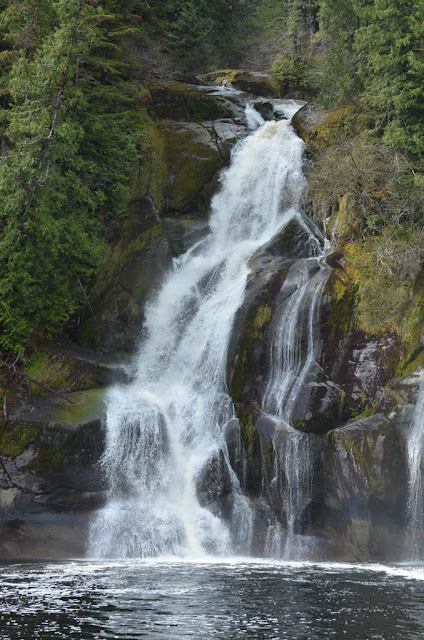 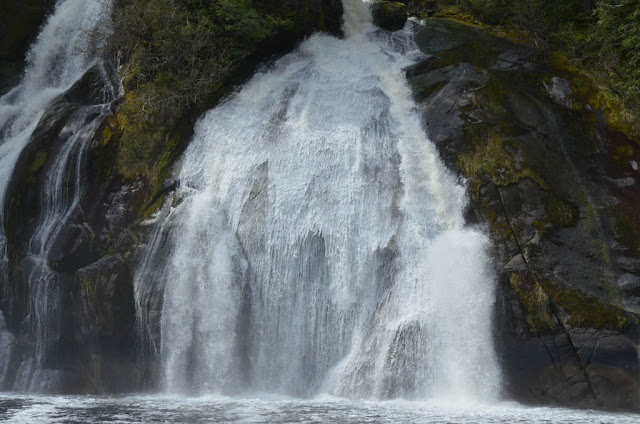 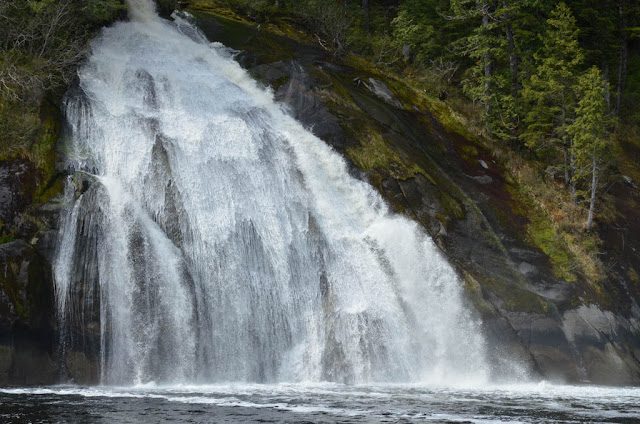 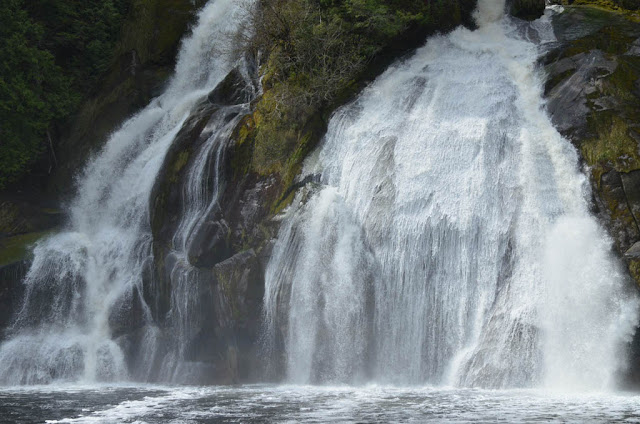 We finally arrived in Ketchikan and got the boat settled in for the month of May while we traveled home to catch up on other things, and for our son's wedding.