This must be Cuttyhunk

Socked in with fog? We must be in Cuttyhunk. It's a wonderful refuge at the western end of the Elisabeth Island chain which flanks one side of Buzzards Bay, and is a perfect launching spot for crossing Narragansett Bay and Block Island Sound before entering Long Island Sound. That's a lot of sounds and bays, isn't it?

The good news is that we made it without incident! This first leg of our journey was a long one at about 80nm, but it's all stuff we've covered many times, and will cover many more times I hope, so we just powered through. Crossing Mass Bay is, well, boring. There's not much to see unless you take the long route hugging the shore, and we had enough fog to make hugging a bad idea, so we just knocked out the 50nm from Gloucester to the Cape Cod Canal. 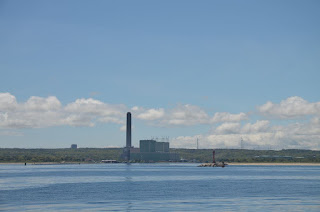 You never know what you will get from the canal. Between the current, wind, and boat wakes it can be a swirly whirly ride, but we had flat water, a following current, and no other boats which made for a very pleasant ride. 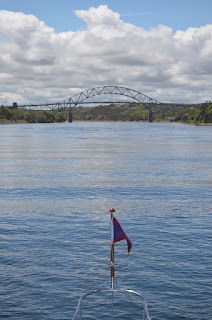 But if the canal is a swirly whirly ride, the transition into Buzzards Bay can be a real life horror show. When the tide and wind are opposing each other, 8' standing waves develop along a mile or two channel and will really kick the crap out of you. But again, we lucked out and found a placid bay all the way to Cuttyhunk.

I promise to get some pictures posted soon, but they are in my camera and I'm posting from an iPad where I can't access them. [Editor's note: I've now added those pictures]

Oh, and speaking of iPads, I'll do my best to catch my typos, but sometimes Apple jumps in and does it for me. I admit that all the typos are instigated by me, but often times aggravated by this silly auto-correct feature. When I first started working on computers in the '70s, I saw a sign that read "to err is human, to really foul things up requires a computer". Some things never change.
Posted by Peter Hayden at 7:59 AM