Thousand Islands and the Rideau

Ok, ok, I'm suffering from Bloggeritis and haven't posted for a while.  Time to catch up.

After hanging out in Kingston for a few days we went for an overnight around the Thousand Islands Region.  The headwaters of the St Lawrence is scattered with (you guessed it) thousands of islands and is a beautiful spot.  We first went up the north-most channel and stopped at an island that's a National Park and has a handful of moorings.  Our canal and parks pass lets us stay at any of these locations for free, along with the rest of Canada.  The first few places we checked out were already filled, but this spot in Endymion Island had all the moorings free except one so we stopped for the night.  Within a few hours all the moorings were taken and two additional boats anchored.  Clearly this is a popular weekend pass-time for the locals


After mooring, Laurie found a comfortable spot for some fishing.

The next day we continued out the St Lawrence and passed under the Thousand Islands Bridge which is the primary land boarder crossing (I-81).  Along the way are lots of cute lake houses.


Just a few miles further we pulled a 180 and started heading back up river, but this time taking the south channel on the US side.  After just a mile or so we came to Boldt Castle which is perched on Heart Island and was partially built, then abandoned by George Boldt, proprietor of the Waldorf Astoria Hotel in NYC.  After 70 years of abandonment, the parks service took it over, finished it, and made it a park.  Boldt may not have finished the castle, but he sure knew how to build a boat house!


The south channel is where all the big shipping traffic is, and we passed this outbound tanker in what fortunately was a wide part of the channel. 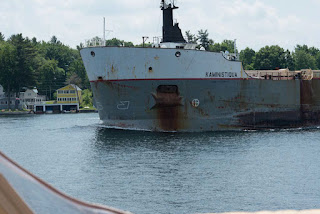 After our Thousand Island tour we returned to Kingston for one more night before heading up the Rideau yesterday morning.  The first flight of locks (4 of them) is the Kingston flight.  Unlike the Erie, these locks are pretty much unchanged since the day they were built.  The lock chambers are stone blocks and much smaller than the Erie, and the controlling depth is only 5' which is about what the very first incarnation of the Erie was.  The gates are all wooden and everything is manually operated.  There are big crank wheels to open the flood gates, and open the doors.  No radios, no red and green lights.

At the Kingston flight, there was a huge cruise boat that we had to wait for coming down.  It filled the entire lock chamber, and only fit because it had a bow that lifted up like a draw bridge.  Below is another time-lapse video of them coming through the last chamber, then us going up.  We locked through with one sail boat and three or four kayakers and collectively we filed the lock.

Last night we anchored in Cranberry Lake just outside of Brewers Mill.  It's a beautify lake that goes on and on and is virtually deserted.  We saw one boat off in the distance for a few seconds, and that's it.  This morning we woke up to rain, but decided to continue on and are now at Jones waiting for the lock.  They are doing some repairs because of a sinkhole that developed in one of the chambers.  I've been able to tap into a local WiFi signal to do this post.