After giving up on getting our packages, we decided it was high time to move on to Prince William Sound.  After all, that’s what we came to do.  So on the morning of the 13th, off we went to Fox Farm Bay on Erlington, Island, just at the entrance to PWS when approaching from the west.  We had a nice overnight, then continued on to Squire Island, now well inside the western part of the sound.  Then next to Mallard Bay on Knight Island, followed by Herring Bay, again on Knight Island.  Then to West Twin Bay on Perry Island, then to Bettles Bay, back on the Kenai Peninsula side.  All this to be staged for a run up Harriman Fiord, and College Fiord to see the College Glaciers. 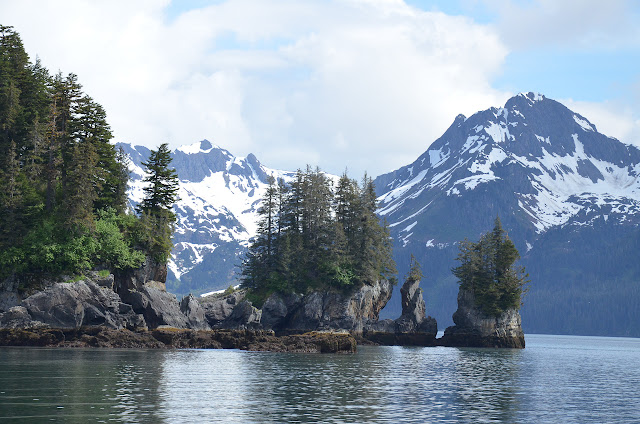 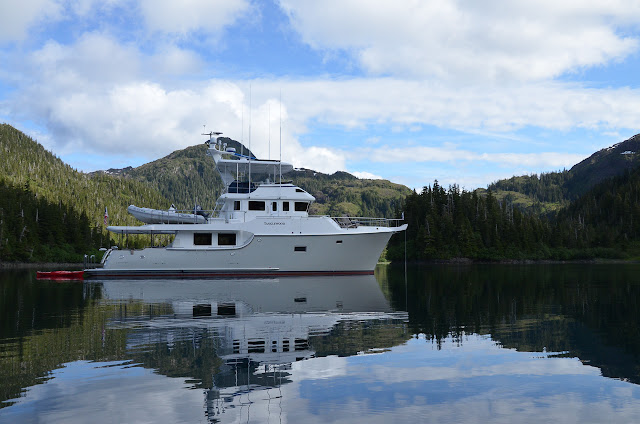 Harriman came first, and what a trip.  There are actually eight different Glaciers that flow into Harriman Fiord.  We were able to get by all of them, and ended up at the biggest, the Harriman Glacier which is still tidal and actively calving.  After poking around for a while, we found a spot that was deep anchoring, but seemed acceptable so decided to stay the night in front of the Glacier.  Throughout the night you could hear rumbles of thunder that was actually ice calving off the glacier.  The next day we did some kayaking around the glacier, and decided to stay another night. 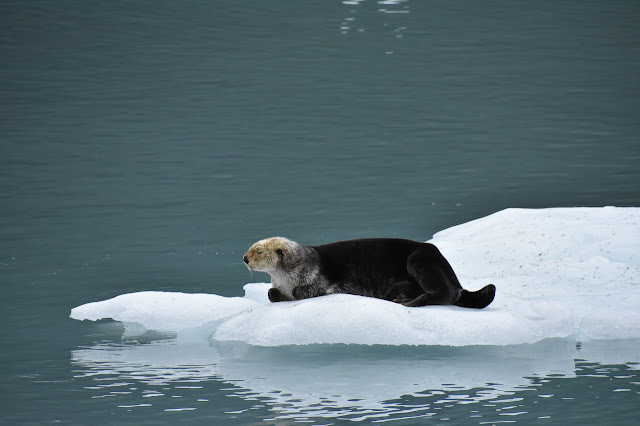 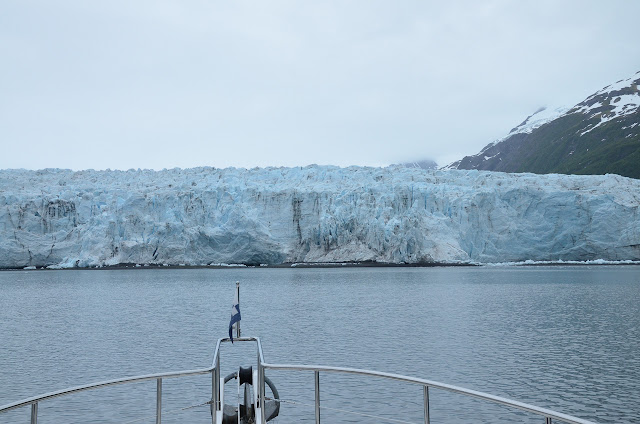 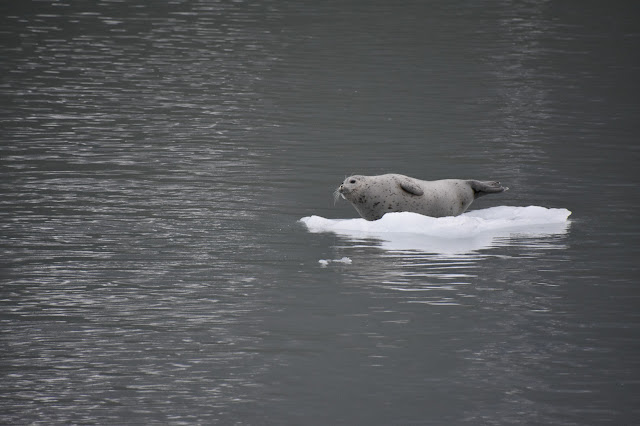 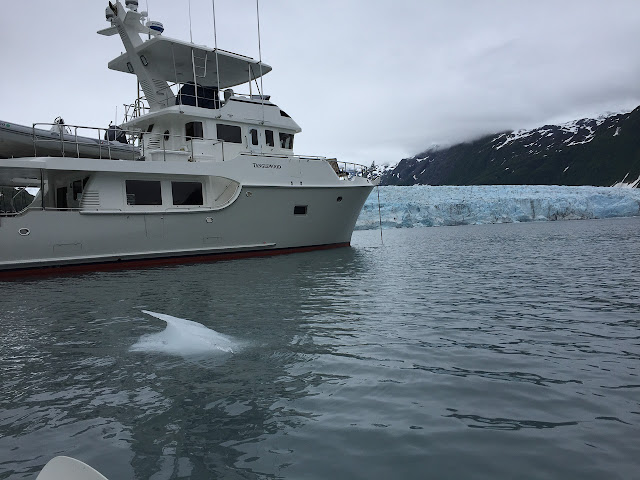 Then we caught a glimpse of an unexpected sight – people walking on the shore.  Where the heck did they come from?  We paddled closer, which took a while, and realized they were in kayaks.  Then we remembered that we weren’t that far from Whittier, and that in fact our own daughter had done a sea kayaking trip out of Whittier some number of years earlier.  We had a quick visit, and off they went.  Over the next several days we saw a number of other kayak groups poking around various areas.

After Harriman, we moved to Hobo Bay which is a little closer to College Fiord, then Bettles Bay, then made a day trip up College Fiord and back to Hobo.  College Fiord has nine Glaciers named after Harvard, Yale, and the “Seven Sisters”.  It's pretty ironic to view these colleges in their historic context as strictly men's and women's institutions, depicted in front of us as ancient glaciers.

College Fiord with Harvard Glacier in the distance. 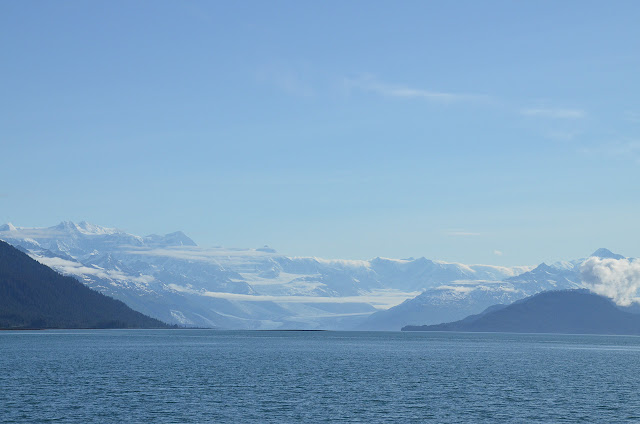 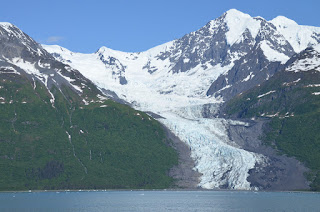 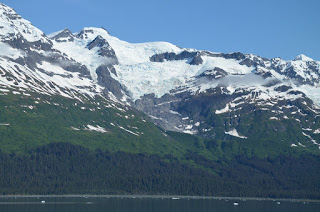 Here are Vassar, Bryn Mawr, and Smith leading up to Harvard. 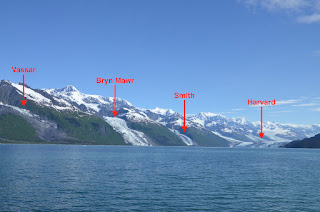 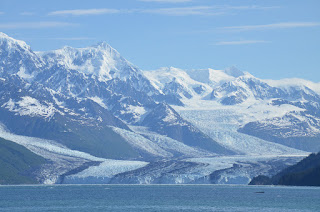 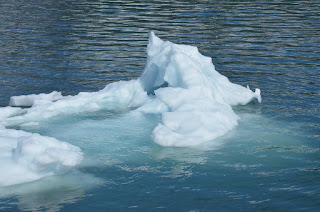 And then, as we get closer, we can’t get any closer.  Lots  of ice. 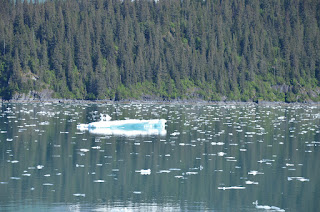 The Yale inlet forks off and leads to  - you guessed it – the Yale Glacier.  Here we are heading up the inlet.  This picture was "Miss January" for the Nordhavn 2018 calendar. 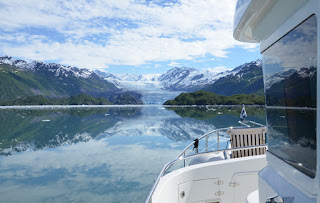 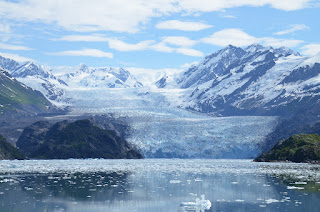 Then we moved in as close as we could to the Harvard Glacier until once again blocked by ice. 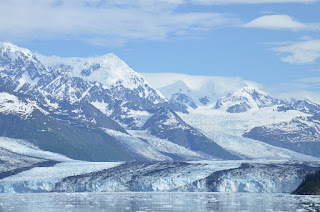 Next stop, Siwash Bay on Unakwik Inlet.  The next day we ran up to the head of the Unakwik Inlet to the face of the Meares Glacier, with plenty of big chunks of ice along the way. 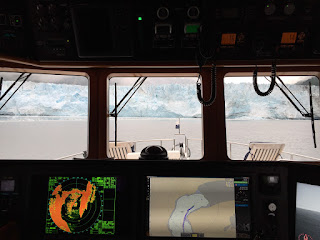 After Unakwik, we started towards the Columbia Bay and the Columbia Glacier.  We were warned that getting close to the Columbia was unlikely because of the large quantities of ice coming down the inlet, and as we got closer, sure enough, the ice got bigger and more frequent.
First stop was Eickelberg Bay as a staging location, then the next morning we headed up Columbia Bay.  But we didn’t get vary far.  There is a bar a few miles up the inlet and huge amounts of ice ground on it making somewhat of a wall.  And even if you can get through it, there is risk of it closing up so you can’t get back out again.  So we poked around the bar for a while, then moved on. 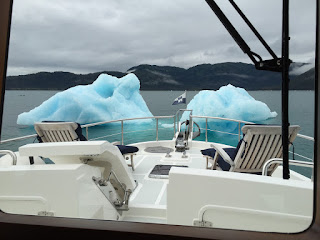 After the Columbia Inlet, we started working our way east and south towards the Hinchinbrook Entrance to stage for our crossing back to SE Alaska.  We crossed the Valdez Channel and rounded the famous Bligh Reef where the Exxon Valdez ran aground and dumped millions of gallons of crude oil into Prince William Sound.  From there we tucked into Landlocked Bay and hung out for two days waiting for weather, then relocated to Garden Cove in Port Etches just inside the entrance, ready to depart the next AM to cross back to SE AK.

July 2, 2017 we departed through the Hinchinbrook Entrance and ran direct back to Sitka, docked at 12:00 on July 4th, just in time for the parade!
Posted by Peter Hayden at 4:26 PM