July 5th we departed Cap a l'Aigle as planned but had a very foggy trip to Tadoussac.  It might as well have been Long Island Sound, except the boats that you pass but don't see are 700' long.  We never saw land, another boat, or a buoy until well inside the mouth of the Saguenay River.  We even came around this little gem of a navigational island, but never knew it until yesterday.

But we arrived around 11:00 and decided to head up the river a bit to see if the fog cleared, which it did, so on we went.  The Saguenay is a fjord about 60 miles long and we saw depths up to 900'.  In many places you can go right up to the cliff face and still have a couple hundred feet of water below you.  But as Laurie reminds me all the time, I'm a real chicken when it comes to shallow water and boats.  Sinking or grounding a boat are not on my bucket list of things I want to do.....

About 35 miles up the fjord is Eternity Bay which is right out of a picture book.  Granite walls rising from the water on two sides, and a valley working it's way inland.  You can't anchor anywhere because it's either too deep, or you will swing aground at low water, but there are several moorings available for use.  I can only presume they are bolted to the rock cliff face down below, but it made for an amazing spot.  We spent an hour or two poking around in the dinghy, and I even went right up to some of the rock faces.  Aren't I brave?

On the way back to Tadoussc the next day we ran past this little waterfall emptying into the river, followed by this view back up the fjord. 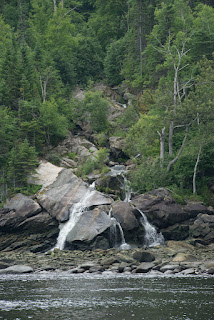 Over the past week or so we have run onto 3 other boats that are taking the same route that we are, though all of them plan to continue south and end up in the Bahamas.  There are two sail boats, Tai Chi and Ke'Ola Kai, and one other trawler, Adirondack.  I expect we will be bumping into one another a lot over the next month or so.

As we were heading back down the river, we passed Ke'Ola Kai heading up.  We updated them on Baie Eternite, and they tipped us off to the location of some belugas that we would pass.  Sure enough, we caught a few sightings, though no close encounters.

And finally we arrived back at Tadoussac, this time able to actually see the place. 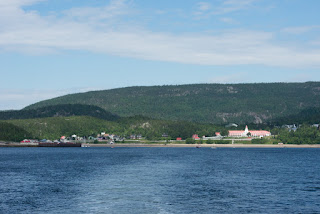 And last but not least, here's the latest map with out most recent progress in green. 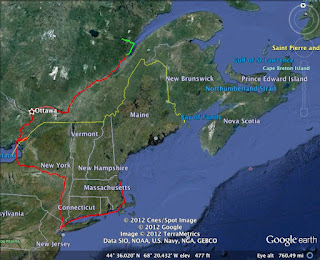